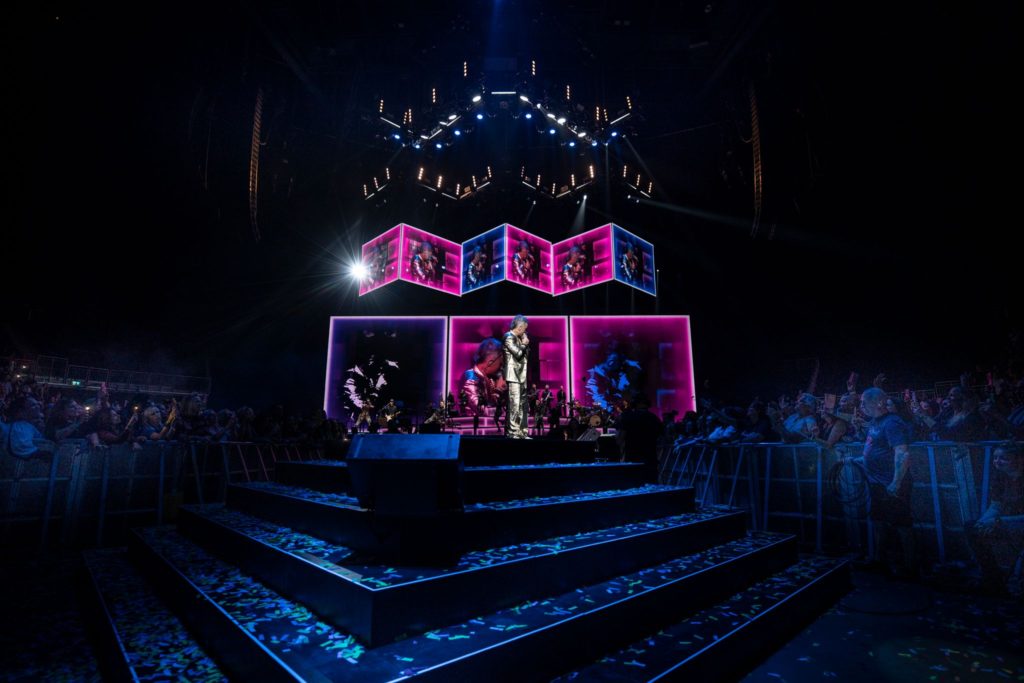 The 22/23 tour is in support of Williams’ latest album, XXV, which sees 25 years of hits re-worked and orchestrated by the Metropole Orkest.

Brit Row were once again able to deliver consistent quality across equipment and crew for the British pop star, whose huge global hits include ‘Angels’ and ‘Rock DJ’.

“Brit Row are absolutely fantastic,” FOH Engineer Joe Harling, enthuses. “These are difficult times, but we’ve received everything we’ve asked for and a team of professional crew at the top of their game. I couldn’t be happier!”

To cover the full spectrum of the show's genre-bending journey through the last two and a half decades, Harling needed a versatile and robust console from Brit Row’s extensive inventory.

“I’m using a DiGiCo Quantum 7 console, which is on an Optocore loop with the monitor console, also a Quantum 7, and all of our stage infrastructure. With so much going on and with having to accommodate shows augmented with live orchestras, it’s really the only console that can handle it all.”

Harling is a long-time DiGiCo user, comfortable with its feature set and sound. “I don’t use plugins,” he says. “But I do have a fairly large rack of analogue outboard gear on a second Optocore loop at FOH. This includes units from Kush Audio, Empirical Labs, Rupert Neve Designs, API, Bricasti, OTO Machines and more.”

Given that the XXV tour is the first Williams has delivered to his eager fans in some years, the audio crew were tasked with delivering an emotionally impactful, celebratory and often heartfelt sonic experience, with real depth, dynamic, and superb clarity.

“It is a fun gig to mix,” Harling continues. “There’s a lot going on in terms of instrumentation and arrangements, plus a wide variety of material from Robbie’s career. I don’t think I’ve mixed a show before that has such a strong narrative arc; it’s quite a journey for the audience.

“Robbie is a fantastic performer, he spends most of the gig out in front of the PA, which can be problematic with some singers but he’s a total pro and there hasn't been any issues at all.”

Harling’s PA of choice is an L-Acoustics K1 rig for main and side hangs, K2 and K3 for delays and KS28s on subwoofers duty (flown and floor arranged), plus a mixture of smaller L-Acoustics point-source boxes for front fill. He furthers: “It’s a fairly loud show, but we work hard to distribute the audio in a democratic way, so that it’s not overly loud in any of the audience areas.”

Williams’ microphone package was also provided by Brit Row, and after testing the Shure SM58, both Harling and Monitor Engineer, Daniel Kent, felt it was the best fit for this outing. There’s also a smattering of Shure, DPA, Telefunken and MyLab microphones on stage.

With 11 band members, six dancers and seven audio and backline crew to contend with, Kent has his hands full across his channel count. “We have about 160 inputs and about 100 outputs, but we've managed to keep things fairly small thanks to the Optocore DD32R-FX network units - which I didn't even know existed until Brit Row recommended them to me!”

Kent has used DiGiCo for his touring arsenal since 2010 thanks in part to their flexibility, macros, matrix mixer, and quality talk back routing, which he finds essential on this tour. “We’ve got 24 channels to talk back, which I've just found incredibly hard to recreate on other brands of desk,” he explains.

“I hadn’t worked with Brit Row before Robbie’s tour, but they've been fantastic. They’ve got fully behind everything I’ve wanted to do. Head of Engineering Josh Lloyd and Head of Digital, Antonio Neto, have really helped me out. For example, we’d wanted Wisycom in-ears for a long time but they've been so difficult to get hold of. Brit Row tracked them down for us, and it’s been like night and day in terms of the RF performance on stage.”

“There is a little complexity to being the RF Engineer on this tour,” adds Lucy Mackinnon. “We have decided to completely change brands and have now moved to 24 channels of Wisycom in-ears and around 30 channels of Shure Axient Mics/Beltpacks totalling around 50 channels to coordinate.”

Due to the large video design, Mackinnon has to consider antenna positions carefully and experiment a lot with antenna gain and filtering. “The Wisycom has been almost faultless in terms of RF and is an extremely strong system that I am thrilled to have moved on to. The band have only had good comments about the sound of these new packs.”

She continues: “In all, Brit Row have provided the entire tour with a top spec’d system. The gear has been built in racks that make load in and load out as easy as possible, and we’ve had an amazing crew. It’s been another fantastic Brit Row tour.”

As noted, a slick production like Williams’ requires crystal clear communication both in terms of radios and backstage IT. Surfhire, Brit Row’s specialist comms arm, provided a meticulously packaged radio system using Motorola XPR3500e radios. The package allows for remote reprogramming when territorial licensing changes or if additional features are needed. Surfhire handled licensing around the UK, Europe and beyond making sure the production was interference free.

Production Manager, John Lafferty, shares the sentiment on Brit Row’s ability to deliver what’s needed, as was facilitated by Account Manager Dave Compton: “They really are all about looking after the client and making sure they provide the best audio service that can be delivered. Put simply, they always go above and beyond. Brit Row are my audio company on Foo Fighters too, because I know we’ll get what we need when I have them in place.”

Robbie Williams will continue his incredibly successful XXV tour across Europe in 2023.