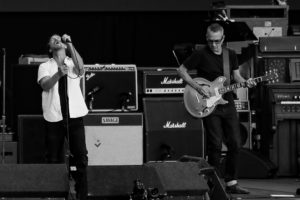 Although the band travels the world with their Rat Sound Systems stage package in tow, Britannia Row Productions was called in to provide audio support for their European run, which included the huge headline shows in Hyde Park.

“I’ve been working with Account Manager / Company Director Lez Dwight and Brit Row for over a decade now, and they’re truly one of my go-to vendors,” says the band’s PM, Steve Drymalski. “My Brit Row tour staff have always gone above and beyond, and the gear has come to me prepped meticulously. When situations come up on a run, they are always very fast to respond, and do so in a timely manner.”

Drymalski began the advance with BST’s Production Manager, Mark Ward, in February 2020, meaning that both band and crew had plenty of time to prepare for what would become one of the most high-profile shows of their entire European tour.

“There’s a special synergy between our touring folks and the festival folks at BST,” says Drymalski. “It’s very much a team effort rather than ‘us vs them’. Due to the amount of time that went by, the anticipation for this show was even greater than it normally would be, but everyone dealt with the pressure in a really impressive way.”

Long-time Pearl Jam fan, Gregory Nelson, was thrilled when he was asked to take the reins at FOH, choosing to mix the show on a DiGiCo Quantum 338. He also specified a selection of outboard gear, including a Neve Portico, an API 2500, two Alan Smart C2’s, three Neve Shelford channels, and a pair of Bricasti M7’s.

“I only started using the Quantum this year but I can confirm that I’m in love with it,” he says. “Pearl Jam can be a very challenging band to mix, as I now have four guitar players bashing away and the bass is also very mid heavy. Blending that with the guitars and making each one stand out is important, and the DiGiCo console is so easy to use in that regard.

“For outdoor shows I have to work a bit harder and get a little creative, but I think we put on two great shows. The crowd was fantastic and the band definitely fed off of that energy.”

Monitor engineer and co-founder of the pioneering Soundgirls.org, Karrie Keyes, has worked with Pearl Jam for a staggering 30 years; a tenure that she says is primarily down to the family atmosphere that the crew have worked hard to cultivate over time. She always travels with the same rider and opts for a DiGiCo SD5 to handle her sizeable workload.

“On the night, everything depends on the set-list,” she explains. “It can even change during the show, and it’s never the same from night to night. For the most part, we have the mixes dialled in with small changes to make, depending on the venue, but audibles can and will be called during the show.”

Frontman Eddie Vedder favours wedges over IEM, so the stage was packed with two Rat S Wedges at the front, two Microwedges for instrument mixes, a Rat S Wedge per side, and two more S Wedges at the back of the stage, as well as four L-Acoustics K2 cabinets per side as sidefill.

“Everyone else is a combination of wedges and IEMs, primarily Stealth Sonics, Clear Tunes, and JH Audio,” says Keyes. “There are over 40 mixes onstage. I mix the band, while Tommy Caraisco handles the Boom Caspar, Josh Klinghoffer, and tech mixes. It’s certainly a challenge to stay on top of it all, but Sara Holt and my Monitor Tech, Brett Heet, are always on hand to help make life a little easier for me.”

Outside of Europe, global support was available to Pearl Jam from the Clair Group, which helped ease any worries for Drymalski and his audio crew.

“Having a strong understanding of Clair’s operation, as well as the confidence in their reach, takes one more item off the ‘keep me up at night’ list, and I know that it does the same for Greg,” says Drymalski.

“Due to our schedule, and the way that our show goes up and down each day, it has been no easy feat for our crew and the guys from Brit Row. They met every challenge with expertise and an incredibly positive attitude. Due to our ‘mother grid’ and the locations of our IMAG screens, audio has to work fluidly with lighting and video. The crew made it look simple and really made an undeniable impact on the flow of the day. It’s been a real pleasure working with our Brit Row Crew Chief, Dan Fathers, and the rest of the team,” he concludes.