The 40th edition of the BRIT Awards, held on 18 February at London’s O2 Arena, featured the event’s most challenging audio production to date; designed and executed by long-term audio partner, Britannia Row Productions.

Brit Row delivered a multistage sound system with a secondary PA in tow, utilising Out Board TiMax 3D spatial audio control. This enabled performances - which included a highly anticipated appearance from British MC Stormzy - to take place under - not in front of - the PA and allowed host Jack Whitehall’s vocal to be localised into the nearest audio system as he worked the busy room.

Delivered to both people in the venue a live television audience, “there is never a compromise on the audio,” says Britannia Row Sound Designer Josh Lloyd. “The high standard expected is driven by the level of performances; every artist knows this is a huge platform, and the sound has to be perfect.”

Created once again by Misty Buckley, the BRIT’s show design allowed for a sympathetic main PA position, while the secondary system was flown high to keep out of shot. Lloyd designed a centre sub array for both stages to provide even energy in the room.

The main stage audio system comprised mains hangs of K1 with K2 for downfills and side hangs, centrally, a flown end fire array of KS28s was deployed. Stage 3’s PA comprised K2 arrays with Kara downfills and a central flown array of KS28s, designed to give even coverage whilst maintaining maximum rejection over the performance space. Delay hangs were a mixture of K2 and A15s with part of the Stage 3 system doubling as a delays for the main stage design. Kara, A15, X8, SB18s and KS28 cabinets were used for fill duties across all three stages.

A newly purchased Outline Newton and multiple L-Acoustics P1 processors were enlisted to distribute the complex signal flow. Multiple layers of redundancy with Audio over IP, MADI and Analogue signal paths with redundancy became a key part of this complex system.

The L-Acoustics M1 measurement platform was tasked with alignment of the system, tight integration with LA-Manager and Soundvision. “Yet again,” says Lloyd, “this proved to be key to delivering a great sounding system under tight time constraints.

“I wanted to achieve the same impact with the choir that we had with Stormzy’s own vocal and allow the audio to follow and enrich a very visual show,” he notes, after working closely with each visiting engineer to perfect their show files.

Stormzy’s FOH Engineer, Wayne ‘Rabbit’ Sargeant, enjoyed mixing on the new design: “The system worked superbly well and considering how far back in the room the FOH position was, Josh’s sub array and time alignment was spot on as always! I really enjoyed his use of TiMax and it gave a great dimension to our show.

“Josh sent a template for the DiGiCo SD5 over and after I’d mixed the rehearsal, I sent our multitrack and desk file / pre-set back to setup with the TiMax dual system. We had a brilliant sounding show thanks to the Brit Row team.”

Besides Stormzy, the night’s live performers also included Harry Styles, Billie Eilish - who sang the new James Bond theme with legendary Smiths guitarist Johnny Marr - and Dave, whose rendition of ‘Black’ was arguably the most poignant delivery of the entire evening.

Lloyd continues: “Dave’s performance gave us a relevant and political statement. I think we’ll look back at his performance as a pivotal moment in BRITs’ history. Audio-wise it was very naked; having something as critical as a single vocal and a piano really showed the power of the system; it was faultless and the whole room was hanging off his every word.”

Artist Production Manager, Joel Stanley, agrees: “In working with Stormzy and Dave, this year was always going to be high profile. Knowing that the team from Brit Row were looking after us meant that our sound engineers and I were in very safe, competent hands. I’ve worked on the BRITs for seven years and I have to say that it runs like clockwork regardless of what challenge you present.

“When we began putting Stormzy’s show together, led by Tawbox Choreographer Amber Rimell, and Creative Director Bronski, we knew it would involve an impressive audio element. With an eight-piece band, 30-person choir, 52 dancers and guest vocalists, there was no room for error. RF can be a genuine concern, yet Brit Row scheduled everything so that we encountered zero interference with our Sennheiser packs.

“Having the added element of automated movement meant when Stormzy moved between stages, audio followed seamlessly. It was amazing to hear in the room in real time.”

Stanley adds: “The gear and crew Brit Row provides is world class, and as viewers no doubt saw from home, we pulled off a memorable show without a hitch.”

The production was run using Sennheiser microphones and IEMs, with Brit Row deploying  Sennheiser Digital 6000 and 2000 series IEMs for all Sennheiser performers. DiGiCo mixing consoles were used throughout. Lloyd furthers: “The benefit of using DiGiCo is that everyone is very happy to mix on these desks because they’re so incredibly flexible - they’re made for connectivity.”

With standout performances and big wins including Lewis Capaldi’s Best Single award for ‘Someone You Loved’, Dave’s Album of the Year success with ‘Psychodrama’ and Stormzy’s Best Male Solo Artist feat, this year’s BRIT’s will be remembered for all the right reasons.

Lloyd concludes: “I think this was the best-sounding BRITs we’ve ever had. Year on year we refine it, but from a sonic and artistic POV, 2020 added a new dimension!” 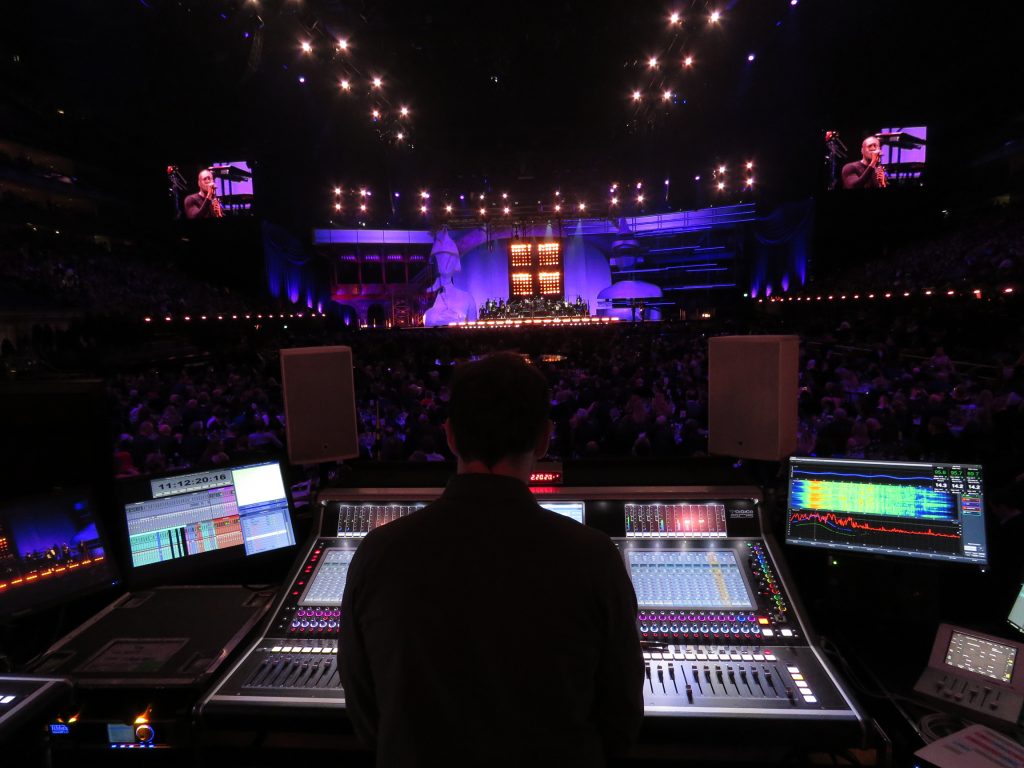