Never one to rest on his laurels, Robbie William’s Heavy Entertainment Show is a robust demonstration of how this consummate performer defies all his critics with his irreverent mix of wit and self-deprecation nicely served up on a bed of enduring hits, sing-alongs and rousing anthems. Between the second of June and the tenth of September, Williams plays to sell out audiences at arenas, stadiums and even the occasional muddy field across seventeen European nations. From arenas to seventy thousand people in the open air is as broad a demand as can be imagined for any PA. Sound engineer Simon Hodge is mixing on an Digico SD7 using an L-Acoustics K1 based system from Britannia Row Productions (Brit Row) and has not found it wanting.

“We have played some very tricky venues, acoustically speaking,” said Hodge. “The new amplifiers and subs that Brit Row has invested in have made a big difference. I was expecting the new subs to be better but actually the difference is pretty phenomenal - they produce notes that I’ve not heard before with what feels like effortless power. The new amplifiers have made a difference to the HF as well which seems extended in to the range that only dogs can hear. I have ultimate respect for Josh Lloyd’s system design and line up but that combined with the new system has resulted in the most even coverage that I’ve ever heard in stadiums.” 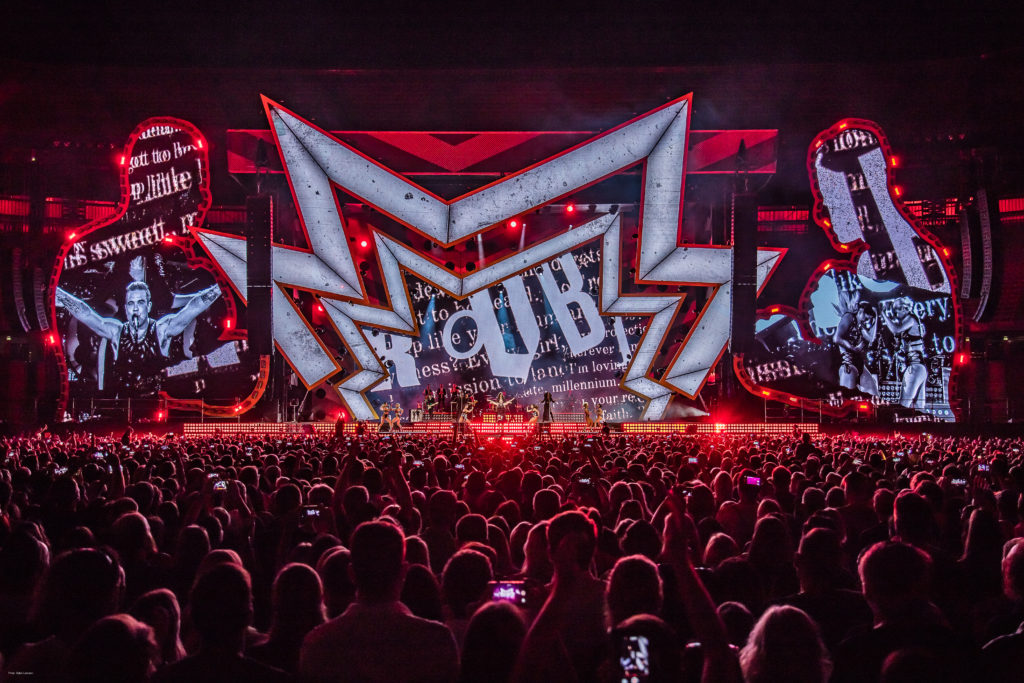 Lloyd’s approach to system design for each venue is rigorous. “I did all the advance work earlier this year so we have a system plan in place before we ever set out. But all shows, especially ones of this scale, evolve, so I do re-examine those plans and finesse them about a week ahead of arriving at each new venue. Using the new Composite Target approach whilst designing the system in Soundvision means we are getting even more consistent results across the audience listening area, so I spend time fine tuning the aiming of the system then finally pre-setting delays and filters in a more informed, empirical fashion; it’s all about making it sound as good as possible.”

The tour had a tougher start than many when William’s long-time monitor engineer Pete McGlynn injured himself in a motorcycle accident just days before leaving production rehearsals. McGlynn recommended another Brit Row stalwart, Jonathan ‘Diggers’ Digby. “Losing Pete was bound to be tricky,” said Hodge, “But his choice of replacement has dispelled any reservations on that front. I’ve worked with Diggers on a few things over the last few years and he has also worked with several members of Robbie’s band before. In that sense, he was top of my list. There is quite a complex set-up on stage, its full on, with a matrix of comms between band members and the audio team, as well as the primary demands of mixing and keeping Robbie happy. The band are very demanding as you’d expect from a leading first division performer of Robbie’s stature. Overall Jonathan has worked out very well; he’s one of the few people I know who could step in and hit it straight away.

The system is predicated on a simple set of K1 mains and sides, with a rear hang of K2. For the larger stadium venues in the UK Britrow also installed ring systems of K2 beneath the grandstand roofs. “We do carry a large pool of K2 for multiple delay applications.” said Lloyd. “The fact is the show PA format changes at every venue, so it is a little bit harder work than many touring schedules.”

Hodge certainly values that extra effort. “Like most engineers I tend to walk the venue in the afternoon with Josh. We listen to some playback material and a multitrack of the previous show. That gives me a feel for the venue and the system response, but it’s the walk later in the day, during the support band where I really get to hear things. What I hear is very impressive; it sounds really expensive. Brit Row has made a good investment and I’m really pleased to be a beneficiary of that.