Britannia Row Productions at The Brits 2019

This year the producers of this year’s Brit Awards took a bold step and encouraged show designer Misty Buckley toward some blue sky thinking (not that she’s ever needed any encouragement on that score). This presented new challenges for audio delivery at London’s O2 arena. “The set this year differs fundamentally in that there is now a large set element flown above stage and out over the B stage into the audience,” explained Josh Lloyd of Britannia Row Productions who have provided the audio for many years. “Think orchestral reflector in a classical music venue and you have the form of it.” Lloyd has been Britannia Row’s audio designer and principal FoH engineer for the Brits for the last nine years and knows more than most how profound this change would prove to be.

“That change has inadvertently made it more exciting. You might say that year on year, every change we have ever wrought has been both incremental and technology led. Once the baseline of using L-Acoustic K1 system was established some years ago, each year we have implemented the latest advance; the new network amps; improvements in system control software and so on. This year we have had to completely re-think the system at a fundamental level to accommodate the visual changes. Fortunately, with a versatile toolkit like the L-Acoustic system, that’s not a headache, more an interesting game of acoustic origami. That’s where the fun comes from.”

On the day Lloyd was unable to participate directly for entirely understandable reasons he was at the bedside of his wife awaiting the arrival of their first child. “Knowing well in advance that calendars would collide we enlisted my good friend Martin Dineley to stand in for me. He has solid experience working with Brit Row on this type of show where the needs of live broadcast and those of a live concert within an arena both require consideration. I’d already mapped the re-design and seen there would be benefits from the way the set had obliged us to totally re-evaluate previous audio solutions. The flown elements of the set effectively pushed what is a quasi-distributed system out from the performance area into the audience area, giving closer proximity between the FoH mix position and the system.”

Any engineer will prefer mixing at a familiar forty metres instead of having to work with a system over seventy metres away, as Dineley confirmed later. “You’re more connected, the better direct to reverberant ratio of the system made it much more consistent from soundcheck to full audience conditions. As ever Josh did a really good job; this was a ground up re-evaluation.”

With artiste’s regular house engineers generally preferring to be in the broadcast mix truck, Dineley took the FoH role in the venue for all of the acts that appeared. Lloyd managed to tear himself away from paternal duties for an hour “Just to make sure all was well. Much to my delight I have to say that since The Brits first moved to the O2 this has to have been the best sounding show ever.”

Sounds like a win win for the Brits and Britannia Row. Josh and Laura meanwhile, now have a lovely daughter. 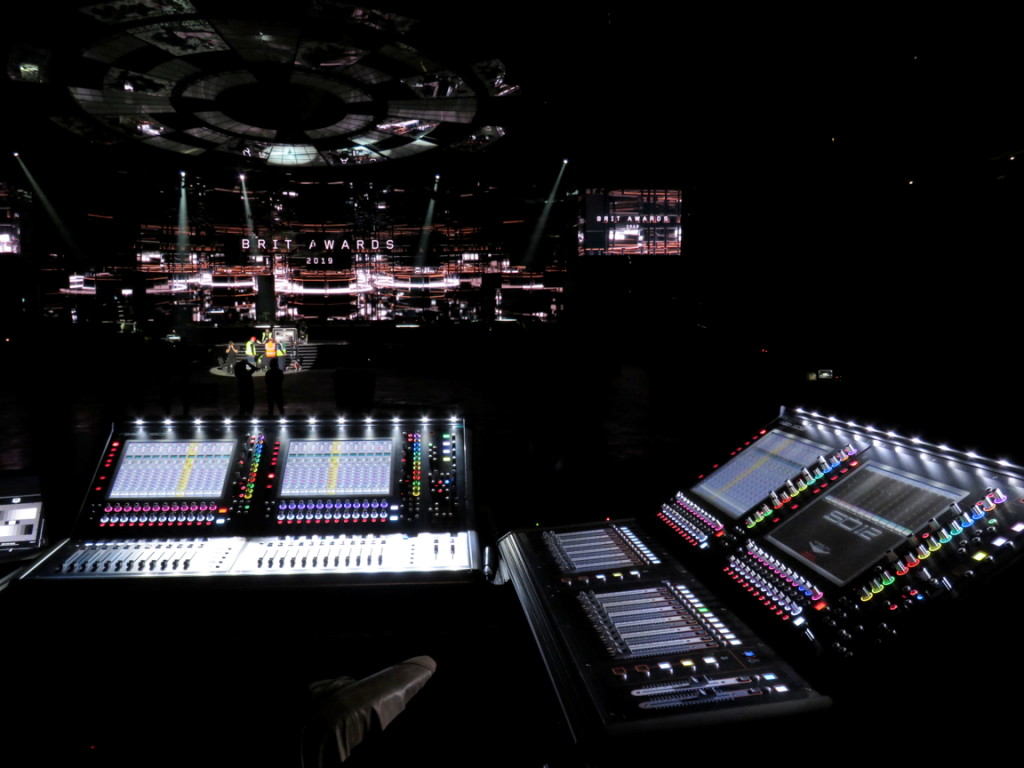