Coming off the back of a shrewd yet confident reinvention, electronic pop trio London Grammar hit the road in support of their latest album, Californian Soul, with a control package from Britannia Row Productions and a PA system from Eighth Day Sound. This was the first time such a partnership has come to fruition since Eighth Day’s acquisition by Brit Row parent company, Clair Global Group.

“I use Brit Row because Tom Brown is an amazing client handler,” declares Production Manager, Mark Sunderland. “And for this tour, I was worried because Jake [Rudd, FOH Engineer] wanted to move to a d&b audiotechnik system. At first I thought it wouldn’t be available to us, but it worked out due to Eighth Day becoming part of Clair. Reassuringly, we could have the kit required and maintain that same level of service. Even though our rider is technically from two companies, all of my interfacing from start to finish is via Brit Row, with every request handled perfectly.”

The band, which features vocalist Hannah Reid, guitarist Dan Rothman and multi-instrumentalist Dot Major, have, by all accounts, loved the sound of their recent live shows. Their new PA setup comprises d&b audiotechnik KSL loudspeakers, GSL subwoofers and Y-Series cabinets for the requisite fills and delays, all driven by d&b D80 amplifiers.

Although the configuration was adapted to suit the tour’s varying venue size, it was arranged as a main L-R hang, with flown and ground stacked subwoofers.

“Hannah is super sensitive to lots of sub and rear rejection on stage,” highlights Sunderland. “So, if there’s lots of bleed, it messes up her monitoring.”

Systems Engineer Craig Burns elaborates: “The GSL and the smaller KSL boxes have inbuilt drivers and cardioid capabilities that create low levels on stage, which gives us the best shot at keeping it as quiet as possible for her performance.”

Although the majority of the venues on the tour have been fairly large, the crew had to squeeze in two Academy shows, where they utilised the house PA.

“We didn't use the house subs so that we could ensure we’d get the rejection needed on stage,” says FOH Engineer Jake Rudd. “By using the d&b subs, we were able to fill in all the gaps and shadows and it worked really well. It transformed those two shows, especially with the nature of the music - electronic with a lot of high octave content. It really brought the show to life without annihilating the stage.”

At FOH, Rudd chose what he calls his “go-to” desk, a DiGiCo SD12 with Waves Sound Grid Extreme Server, and a Bricasti M7 Reverb. Rudd selected a Telefunken M81 microphone for Reid’s vocals, after a process of elimination.

“With the added sounds of their latest album, it's now a very dynamic live set,” he notes. “There are some very quiet, delicate moments where it goes back to their roots – ethereal vocals and piano-led songs – as well as these very big electro moments when the room becomes a club. The mix has to bounce well between the two.”

From the stage, the crew had an SD Rack with a 32-bit card taking care of all the drums, keyboard, synthesisers, guitar, bass, and an acoustic guitar. All of the playback runs through an Optocore DD4MR-FX; an interface perfectly suited for use with DiGiCo digital consoles.

The support band – Eloise – had a Brit Row-supplied SD11 at FOH and an SD Mini Rack sitting on the existing Optocore loop.

Brit Row also provided Shure Axient IEMs, Shure PSM 1000s and a DiGiCo SD11 for all of the band’s RF and monitoring needs; a choice that Sunderland – who pulls double duty as London Grammar’s long-standing Monitor Engineer – believes is ideal for the band.

“I think the key for good monitoring is addressing your artists’ needs,” he says. “It's totally down to communication. The hardest thing is extracting information from someone who doesn’t use technical language and interpreting it. You need to hear their concerns and understand what will make things right for their show.”

Although Sunderland downsized from an SD10 to an SD11 for this tour, the latter mini console is able to handle everything he asks of it. “That’s the beauty of DiGiCo,” he says. “As long as you can get the I/O count that you need in terms of the interface, you’re off.”

Reid’s mix is focussed on her vocal, along with whatever the dominant part of the song’s is – free of drums and with barely any beats – while bandmates Rothman and Major favour a mix closer to the band’s recorded sound. Sunderland reveals: “I use Waves on the drums for both the guys and all of the crew, but Waves signal path doesn’t touch Hannah’s ears because she can actually hear the latency.”

The core audio crew was completed by Eighth Day Sound PA Tech Grant Cropley, who praised the reality of this new hybrid era. “It’s still all very new to us, blending the companies, but it’s been really seamless,” he comments. “Plus, it’s great that the band and crew are so happy with the results.”

Burns agrees, concluding: “As a freelancer, I've worked for lots of people and I have to say that Brit Row have been so friendly and helpful. In this day and age, that matters. Put simply, we get ‘above and beyond’ service.” 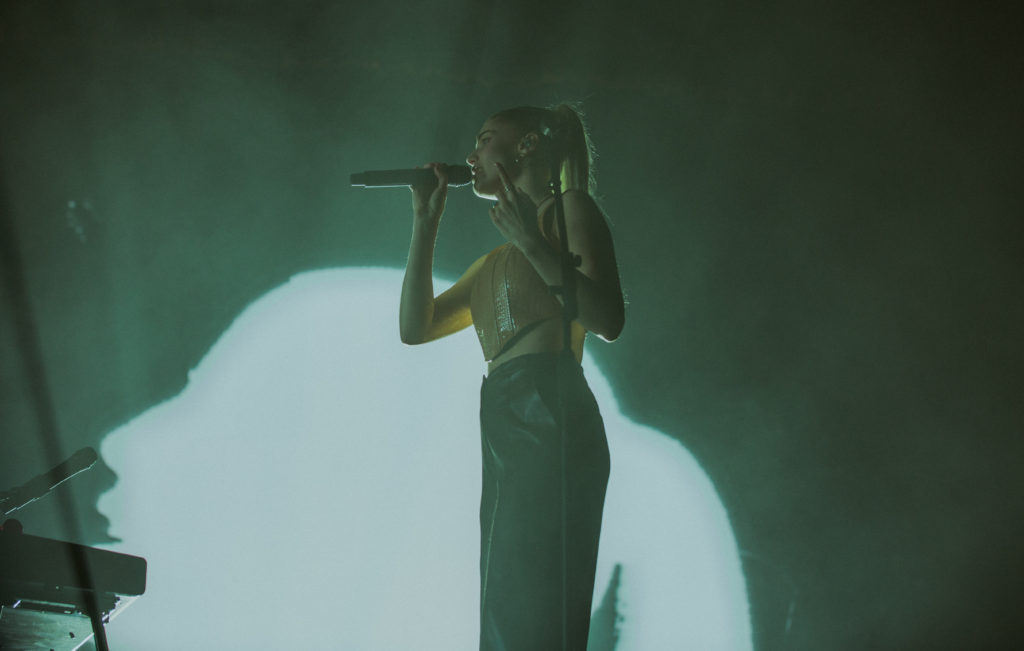