Britannia Row Productions provided a full audio package and crew for the Young Voices UK tour, which saw the world’s largest children’s choir visit arenas up and down Britain for multiple, packed-out shows.

The tour featured an unconventional arena setup, with the stage positioned at the back of each room and the Young Voices choir taking the place of the audience.

“It’s a very different kind of show in many ways,” says FOH Engineer, Gavin Tempany. “Usually, the stars of an arena show are the band, but this time it’s the children in the choir, who are singing to a crowd of their parents. We have a different set of them each day too, so there are between 6,500 and 10,000 children and teachers coming in and out for their performances each night.”

Given how damaging a long day of noise exposure could be for both the children and the crew, Tempany kept his FOH mix sat between 85db and 90db, while also heavily monitoring the level being sent to the choir.

“We’re quite restricted on how loud we can turn them up,” he says. “Although there are a lot of them, they don’t actually sing very loudly, so I’m constantly working the mics to get them up over the band. I’m usually on the verge of feedback, just trying to squeeze the last few drops of noise out of them.”

Tempany went on to explain how the Perspex parabolic microphone dishes he deployed can help with this issue, giving 4-6dB of gain before feedback due to their directivity, as well as being shielded somewhat from the formidable Clair CO-12 Cohesion line arrays and Cohesion CP-218 Dual 18-inch powered subs.

“Naturally, with this many children in one place, the danger is a lot of midrange energy when they sing or if they are excited and scream,” Tempany explains. “Having it clear, yet not painful to listen to, is a very tricky line to tread. We also have guest artists who will sing a song on their own with either the band or a backing track, and then incorporate the choir as backing vocalists.”

Tempany selected an SSL Live L550 – his usual desk choice – to ensure he stayed on top of these issues.

“I tried to keep the FOH setup as simple as possible, gear wise, with no external outboard or effects,” he notes. “My intention, as always, is to try and use everything on the console, as it’s much simpler to recreate down the line and a lot less to integrate if it needs to be swapped out.”

As well as mixing for the conductor, band, and choir, Monitor Engineer, Grace Howat, also had to contend with 18 guest vocalists across the different dates; many of whom performed at multiple shows but not necessarily for several days in a row or even at the same venues.

“Every show featured two of the rotating guest artists in different pairings, so we had to have a detailed plan about equipment allocation for all the various permutations of guest artists, as well as radio mic and in-ear allocations,” says Howat. “This meant that console scenes at FOH and monitors could be re-inserted into the running order without any hiccups.”

“Although the conductor had the massed choir on top of a full band mix, more or less everyone else had, at most, just a tickle of the choir in their mix,” she explains. “As he is the lynchpin of the show, the conductor is a bit like the lead singer on a ‘regular’ gig. He needs his mix adjusting a lot, so I tended to stay on that most of the time.”

Brit Row provided a variety of microphones for the tour, including Shure Axient radio handhelds and DPA headsets on Shure radio belt packs for the vocalists, as well as Shure, Sennheiser, AKG, and Neumann mics for the band and Schoeps for the choir. Howat also opted to run her mix on an SSL Live L550.

“The biggest challenge for everyone in the audio team on Young Voices is on load-in day, where the main issue is being ready in time to let the children in at lunch time,” says Howat. “It’s long mornings of non-stop work and we all pitch in to get the job done. There’s a large amount of audio to put in for the show and it all has to go together in a particular order.”

The Young Voices client liaison at Brit Row is Tom Brown, who continues to navigate the unusual arena tour with ease, as Tempany confirms: “I’ve been working with Brit Row for a long time now, and it’s always a pleasure. They always offer well-maintained equipment, integrated in a way that’s very efficient to set up each day. Add to that great backup from the warehouse, and it’s a formidable combination!” 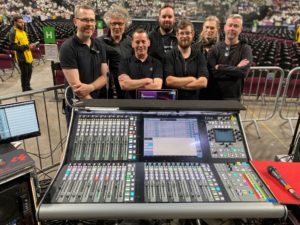 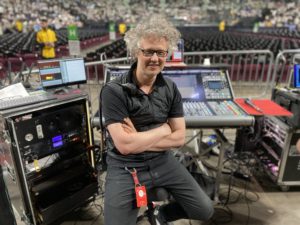 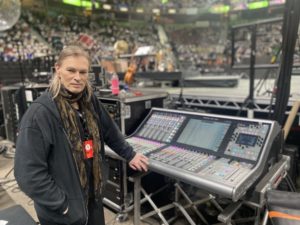