In 2017, Britannia Row was tasked with providing live audio for the North London football team’s ground closure at White Hart Lane. After proving itself as a trusted audio supplier to the Premier League club, two years later the rental house was asked to supply top engineers and a control package for a special event to mark the opening of the club’s new stadium.

Britannia Row Client Liaison, Tom Brown, explained why it was a very important gig to execute perfectly. “We had some of our expert TV and touring crew working on this job. With an event like this, there’s simply no room for glitches.”

Britannia Row also brought in broadcast sound supervisor, Toby Allington [The BRITs / MTV EMAs] to provide a music feed which Sky then mixed in with their sports ambient mics. The broadcaster had final control over what hit TV screens.

Before the match against London rivals Crystal Palace, fans were treated to 45-minutes of team favourites by The Tottenham Hotspur Marching Band before the official Opening Ceremony was broadcast live on UK TV. The artists comprised a choir from Gladesmore Community School [orchestrated by Musical Director, Steve Sidwell] with Lanya Matthews leading the vocal celebrations. The pupils were also joined by Spurs super fan and Welsh tenor, Wynne Evans.

Britannia Row provided the live audio mix and a broadcast feed for the Sky Sports crew. Mixing desks deployed were Yamaha QL1s, which received stems from the Britannia Row playback system. A package of Shure handheld microphones, Shure IEMs and 32-channels of RF were also utilised.

Brown continued: “The RF needed some figuring out, with the channel list fitting for TV coverage. As far as our equipment goes, we deliberately designed the system with a small footprint. We built the spec around the varied line-up [from a soulful songstress to rap and operatic vocals], which played for around 10-minutes.”

Gary Beestone said: “This mini concert had a huge audience and called for a collaborative approach between both our team and Brit Row. We had a very intense task ahead but with Tom Brown in place handling audio from the very beginning, it meant the project benefited from absolute continuity; from conception right through to the delivery, I knew we were in safe hands.”

Britannia Row has managed audio for a number of high-profile live sporting events such as the Rugby World Cup, Game 4 Grenfell (the tragedy’s charity football match) and a host of NFL and FA games to name but a few. Brown revealed: “Taking a gig in and out of a football or rugby stadium is difficult and requires some precise logistical management, obviously nothing can get in the way of the game. This show went very smoothly; we had a very happy client and a great crew in place to mix the performance and get it right the first – and only! - time.”

According to Beestone, Spurs’ 2-0 victory wasn’t the only success of the night: “Brit Row are very well suited to both high-pressure and largescale outdoor events. They’re able to deliver huge coverage and, as usual, the sound quality was faultless.”

The Britannia Row crew were 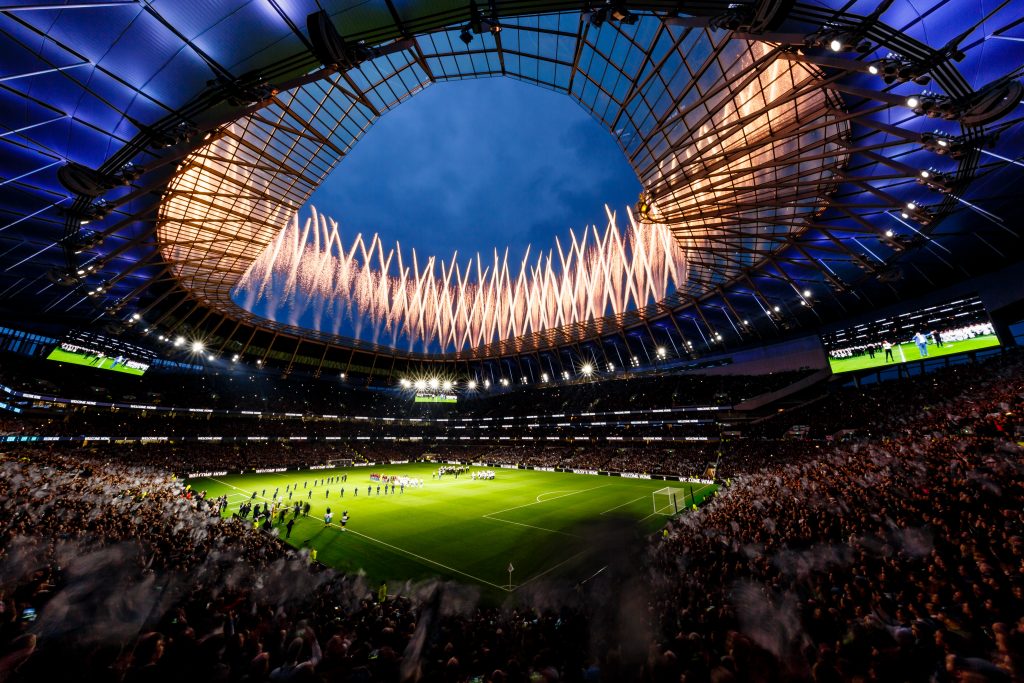 During the Premier League match between Tottenham Hotspur and Crystal Palace at Wembley Stadium on March 17, 2019 in London, United Kingdom.